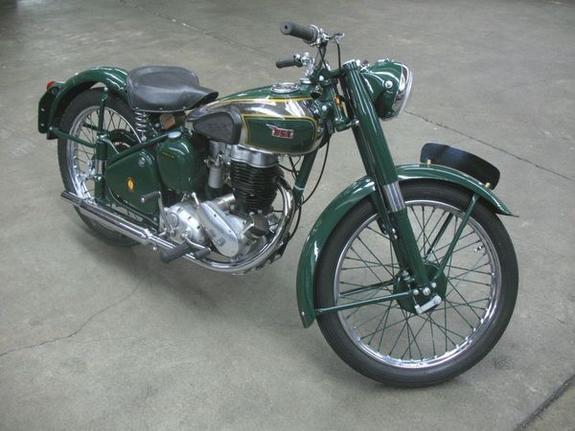 I can recall the day, six months ago, that I bought the BSA C11. It was one of those marvellous English summer afternoons – bright blue sky, burning sun and the delightful aroma of greenery as the 249cc thumper boomed through the countryside. Soon was added a burning smell from the clutch. I reduced speed from a thumping 60mph – rubber mounting and balance shafts were not technologies that BSA knew anything about in the late forties. At 40mph the smell went away and I just had to make sure I wasn’t run over by some caged lunatic.

Entering Sheffield, home in sight, ped’s and car drivers turned curiously to look at the loud, earth shaking apparition that was a C11 wobbling through town. They seemed quite disturbed by the sight. It wasn’t concours and I wasn’t some old codger. The exhaust was rusted through, the rest of the machine coated in road grime. Its past owner some ancient hippy more interested in weed than maintaining or even cleaning what many consider a classic motorcycle. I still had to pay £750 for the old heap, though.

Back home, the weak clutch turned out to be nothing more than loose spring nuts. In fact, most of the nuts and bolts on the bike were a touch loose. I later found that, despite using Loctite on the threads, a fifty mile ride would have everything coming apart! I solved the worst of this by wiring in all the important nuts and bolts!

Didn’t make any difference to the vibration. In theory, the engine made 12 horses and could put 70mph on the clock. In reality, more than 60mph resulted in a huge outpouring of vibration from the ancient OHV engine. I once – and, only once – held on tightly, with a following wind, overtook a mate on a CD175 who reckoned I must’ve been doing 75mph. The clock was so blurred and my eyesight so out of it that I couldn’t read the speedo!

This took place on a long, straight B road that me and my mates always use for the odd bit of speed testing. There aren’t any turn-offs, so no loitering cop cars. Its one downside is the presence of lots of small bumps. On anything made since 1960 these are hardly noticed but on a bike with girder front forks and rigid rear end, I was almost shaken off the sprung saddle. The CD owner thought I was playing silly buggers when I weaved in front of him – I had no way of controlling the bike accurately.

It wasn’t that bad when on smooth roads – I’d owned an old style chopper that was much heavier going. The firmness of the suspension gave it a unique feel of sure-footedness on good roads but the slightest bump in a bend had me backing off rapidly. The C11 runs quite a heavy flywheel, slamming the throttle shut can have the wheel reacting against the bump. Depending on the angle of lean, severity of the bump and degree of velocity this can be mildly amusing or a near death experience. If, like me, your licence is near extinction the lack of speed and interesting handling keeps the boredom at bay.

12hp is restricted 125cc territory, except that the BSA is always full of blood and guts, demanding a certain amount of tenderness on the gearchange lever and throttle to achieve usable forward motion. Put a complete learner on one of these machines, the chances are they will either fall off or quickly give up in disgust. Even the kickstarting requires a hefty lurch that bears no relationship to the minimal power and small capacity.

Its origins were totally pre-war and limited by metal rationing after we’d beaten the Germans to a pulp but though slow it was reliable and long-lived – the BSA singles only became dire, like the twins, when they were increased in capacity and tuned to silly limits. I soon became used to the thumping vibration, finding modern, small capacity Japs quite insipid in comparison. In contrast, their riders got off the BSA, after a quick blast, complaining of dead fingers, numbed feet and painful teeth! Definitely an acquired taste.

As were the brakes. Pitifully small SLS drums that needed a death-grip before they showed signs of working. The exhaust noise and disturbing vibration always made cagers and ped’s aware of my imminent arrival (from half a block away, I’ve been told!). The rest of the survival routine was planning well ahead. This era of BSA’s don’t change direction rapidly, being large of wheel, but the well triangulated girder forks don’t easily bend in crashes – cagers seemed to appreciate this, somehow, didn’t throw themselves across my path very often. Wearing an old Barbour jacket over several layers of clothes bulked me out to an aggressive extent. I must’ve looked quite frightening from the seat of a car!

The rigid rear end of the bike meant the sprung saddle took rather a battering from the usual ruined road surfaces. We hear tales of sperm count being cut in half over the past few decades but judging by the way the front of the saddle slammed into my groin, the oldsters couldn’t have been very well endowed. The worn springs allowed a bit of lateral movement that would’ve had me all over the place had I not gripped the tank firmly between my legs. As the tank vibrated quite fiercely this didn’t really add to the comfort. 50 miles in one go was more than enough for me. Maybe I’m a wimp, or something, but some classic nutters have claimed to do 150 miles in one sitting in their youth! Ouch!

There were some good points about the ancient hack. It was absurdly cheap to run. 70-80mpg, chains, brake shoes and tyres that didn’t seem to wear at all. Although the engine required quite a lot of fiddling, it never seemed to wear seriously – I added 4500 miles to whatever it had already done (maybe a quarter of a million miles, who knows?) in less than six months.

I also cleaned it up – the old alloy and paint responding remarkably well to some serious effort. Only the silencer was so far gone that it developed big holes and made starting increasingly difficult. An old BSA A65 can went straight on as if it was designed for the job, sounded almost as fruity and made starting a second kick affair from cold. From hot, it just needed one almighty kick. As far as I could tell the bike was standard, just minor patching up where necessary. I could well believe that it had passed through the hands of a series of serious motorcyclists who had revelled in its outrageous practicality. A modern equivalent, albeit one with suspension and brakes that worked, would be an Indian Enfield.

Towards the end of my ownership I fell for a young lady who demanded the plush perch of a more modern steed – the little bit of rubber I’d attached to the rear mudguard didn’t go down too well. I was tempted to keep the C11 as a second bike but someone offered me £1500 for the shining relic. They ain’t worth that much but I’m not going to complain, am I?