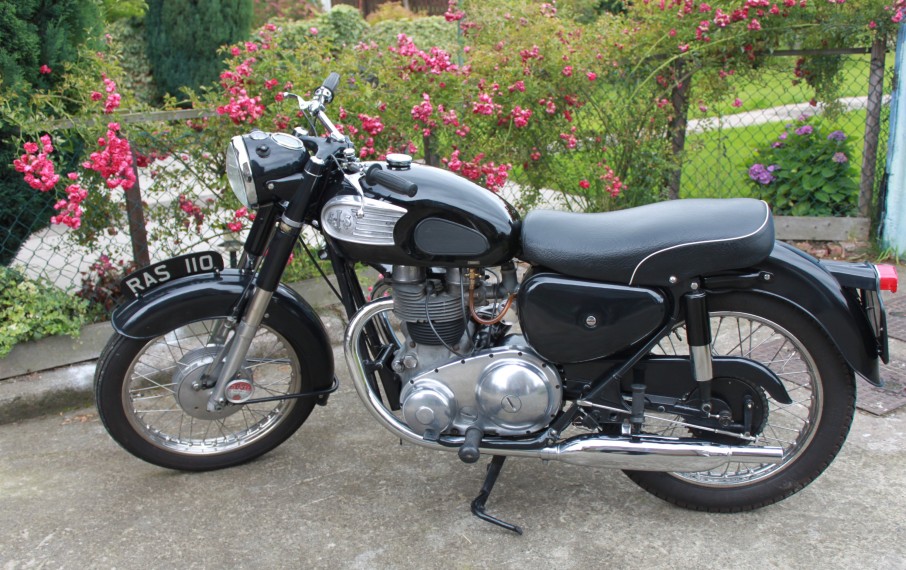 My elder brother had owned the AJS Model 31 for a long time. He had shocked the motorcycle fraternity of the University of London by turning up on the 1963 machine. Immaculate it wasn’t but nicely turned out, with the usual upgrades to electrics, brakes and tyres. That was six years ago when I was only 13. Inevitably, watching my brother ride off into the distance with his girlfriend on the back had me all agog. I was heavily into bikes before I was allowed to swing my leg over one. When the girlfriend became his wife, demanded a cage I had the chance to buy the venerable Ajay OHV twin…with the proviso that he could buy it back when resources allowed.

I’d passed my test on the usual joke CG125 and ridden the Ajay a few times. Vivid memories of power, vibration and all the road shocks delivered to my kidneys. Rather than put me off, I just wanted more and more. The bike just looked and sounded so right. Once into my ownership my enthusiasm knew no bounds. I’d leap out of bed at unlikely hours, run down to the garage to check that the Ajay was still there and revel in its glowing chrome and polished alloy. Couldn’t believe that, at long last, it was all mine!

I didn’t have that many problems adapting to the gearchange and brake levers being the wrong way round (that should read right way round, but it is a minority view). The change itself was amazingly predictable after the horror show on the worn out Honda. With its separate gearbox, proper oil could be used without it being too viscous for the rest of the motor. The clutch lever did require excessive effort and soon had my fingers screaming for mercy. Took about six weeks until it didn’t hurt any more. Take up was a bit vicious, dead easy to leap forwards and stall the mill – very embarrassing.

There were a mere four ratios but the spread of its 40 horses was such that no more were needed. Fast turning it wasn’t, a bit of a plodder by nature it gasped rather than hurtled forward if the throttle was twisted hard. But give in to its nature, twist the throttle carefully and slowly, the motor would wind itself up and the bike hammer forwards relentlessly.

No problem with the traffic light GP. Poor old cagers left open-mouthed, eardrums shattered by the almost straight-thru exhaust. Sometimes, I’d go out early in the morning (I live in the Wessex countryside), ride down the back lanes without a helmet. Stupid, suicidal, etc! But, oh, what a new world. 50mph felt so fast with the wind whipping through my air, my eyes streaming with tears until they because used to their exposure and the exhaust making one hell of a racket whilst the engine sounded like all the bearings were shot. It’s surprising how much noise a full-face helmet shuts out.

These bikes come from a period when crash-helmets weren’t compulsory and doing the ton was a major achievement. For sure, a lot of riders ended up dead or maimed from accidents but riding without a helmet is one hell of an adventure in nanny-state Britain. It fitted in perfectly with the character of the Ajay, which was really pushing its limits if more than 80mph was held for any length of time. My brother reckoned a top speed of 115mph but then he has a mouth full of false teeth and ten year’s practice at absorbing the vibes.

He also reckoned that once past 105mph the engine smoothed out, but I could never bring myself to subject the Ajay to that kind of abuse. 95mph was the most I ever did, which was bad enough to leave me with ringing ears for 24 hours. I did that run wearing my helmet, I hasten to add. I did do 80mph helmetless once but it was amazingly hard work even with the excellence of the bike’s riding position which kept me happy both on the open road and in town. I can’t imagine how the old ton-up boys got away with riding like that day in, day out.

Give the Ajay a good run, it’s start trying to undo most of its nuts and bolts. They didn’t actually fall off but they would’ve had I not gone over the bike after every hard ride. The only real trouble spot I had with maintenance was doing the valves every 400-500 miles – they went very loose indeed if left for longer. Tightening up the adjusters I’d find the gap closing up. Tiresome; an acquired art as brother did them all in less than ten minutes compared with an hour’s cursing from me.

The suspension was firm, its short travel nature giving the bike a very solid feel – my back took about a month before it stopped complaining! The engine was mounted low in the frame but all the bits and pieces tucked well in (brother had cut back the stands and fitted folding pegs), so it could be heeled over on to the edges of the quaint square-cut Avon rubber. It went a bit squirmy at extreme angles of lean but it was surprising how rapidly I could sling the 400lbs machine through the twisties.

Gave a few Jap riders a shock, anyway. There was much more fun involved in every ride than pain. It has to be mentioned, I suppose, that brother does a complete engine rebuild every 40-45000 miles. That involves a rebore, new pistons and rings, new crank bearings, etc. Between rebuilds it needs a couple of primary drive chains, valve guides and its very regular maintenance sessions. However, it’s all very predictable, unlikely to catch you out on the road. When anything starts to go, there’s a lot of extra noise and vibration. Bruv has an impressive collection of spares, collected cheaply over the years. The owners club is another good source of spares, gossip and tips. You see very few Ajay’s on the road, even compared with Triumphs, BSA’s and Nortons.

I was lucky in that the bike had been rebuilt 4000 miles before it fell into my hands. All I had to do was the regular maintenance and keep the bolts tightened up. Poor old brother, though, was a bit of a pain. Coming round to check the bike was still in one piece and have a ride. His angst was so great that his wife gave in and allowed him to buy the bike back after seven months in my hands.

We almost came to blows, the resolution being another AJS twin. Not immaculate or original but all there and well loved by another obsessive enthusiast who’d found all the kick-starting too much for his bones – he was 74! It took several trips to convince him I was going to look after it, he reckoned I was far too young to appreciate such a masterpiece of British engineering. An old codger at 19? Sure, but you should see the grin after each and every ride. These bikes get to you!