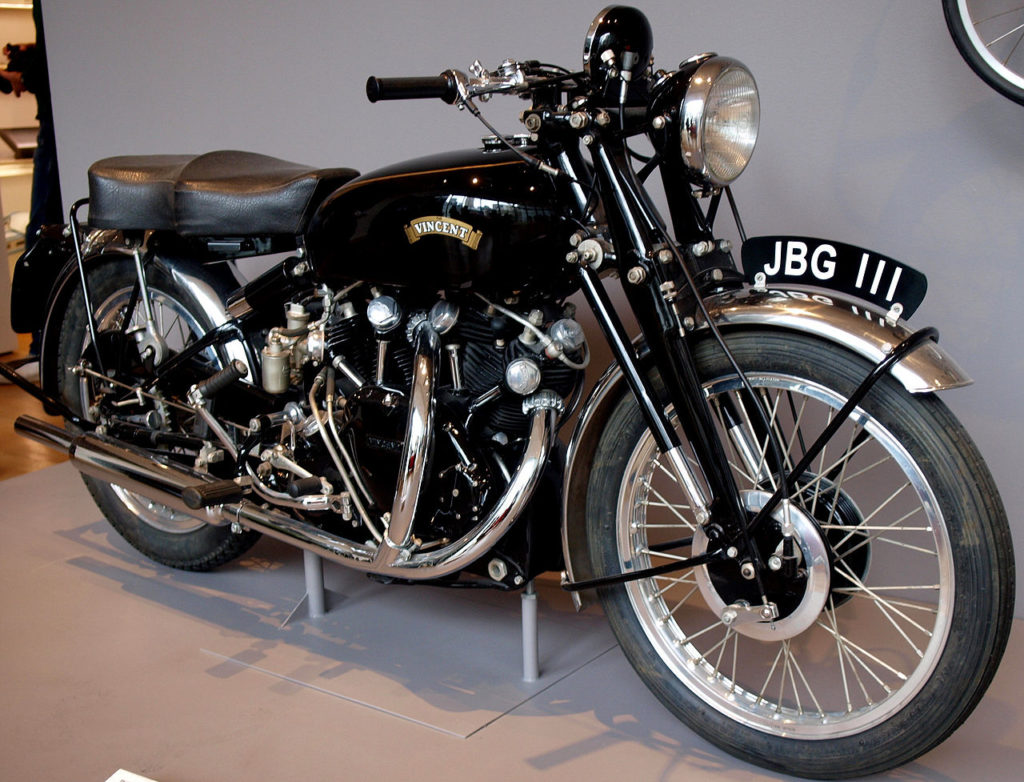 The first real tank slapper I had (this was when I hadn’t owned it long) I thought I might be riding it wrong. After all, the Norton Dommie I’d owned didn’t do that sort of thing. The second time was the real frightener – I shot between two cars on the wrong side of the road and narrowly missed mowing down a chip shop queue. I knew then that I was in for a trying relationship.

In a vain attempt to overcome this debilitating behaviour, I adjusted the slack out of the many bushes in the forks. Found, after much experimentation, that the only way to tame the beast was to tighten the steering damper until the bars can’t be turned! Goes down a treat at MOT time.

Before I discovered the damper trick, I had a good mate who reckoned he could master any bike within ten minutes. I let him have a ride (second opinion and all that) and despite being warned he set off for a blast past the factory gates, determined to do 115mph. When he eventually returned looking bug-eyed, tight-lipped and with a definite tremor in his pallid knuckles, his only comment was that I should get rid of the bloody death-trap! Sound advice which I didn’t take.

As I was new to Vincents, I blamed myself for the erratic starting. Although I knew the ridiculous drill – I’d owned big singles before – finding the correct stroke on the rear cylinder, etc, it wasn’t until the beast completely stopped starting that I investigated. Finding a dodgy spark, sloppy valve guides and 11:1 pistons conspiring to prevent the horrible thing from firing.

Now, I’m not a bloke who gives into adversity easily – I’ve lived with the same woman for twenty years! I was becoming dangerously fascinated with a nearby mineshaft that was waiting to be filled but after ingestion of what are now considered harmful chemical substances I mended the magneto well enough to give 50/50 starting – that’s fifty Hail Mary’s followed by fifty pneumonia-inducing swings on the appropriate pedal.

To repay me for this act of kindness on the next ride, as we were returning from Scarborough, the gearbox jammed in third, resulting in a burnt out clutch on Saxon Hill hairpin; although on this occasion the bugger did get us home without resorting to the train.

After burrowing into the mysteries of the, er, unusual transmission and knocking the sliding (when it’s not seized) gear off its shaft with a steel tube and large hammer, easing the bush with a scraper and reassembling, I refilled with EP90 gear oil and have never had the problem again. Which makes the gearbox about the only trouble free item…

Not long after this mischief I fitted 8:1 pistons in an attempt to gain easier starting. It didn’t work – I discovered much later that Vincents need a 150 percent healthy magneto but I did succeed in considerably reducing performance. It would just about pull the ton! Mind you, it never has done the much trumpeted 125mph, even with an expensively rebuilt engine which includes racing cam, big carbs, new mag and straight thru exhaust.

This lack of a decent top speed was just one of the many disappointments. The bikes that were supplied to the press in 1947 must’ve been very special or else the writers very dishonest. Take the supposed 100,000 miles between stripdowns – mine’s managed 25-35000 miles (can’t be too specific as the speedo keeps breaking) despite changing the oil every 1000 miles. And the engine’s completely shagged out, and I mean absolutely knackered – major engineering work is usually required when rebuilding one of these vee twins. Very expensive, equivalent to the cost of a few LC’s – I know us classic bikers aren’t supposed to acknowledge such strokers, but I think they’re the best thing since inside bogs!

Stepping from an LC on to a Vin, the most noticeable difference is the brakes. The LC has ’em, the Vin doesn’t. Even though I haven’t ridden into the back of a bus recently, I still find it difficult to believe that the brakes I’m stuck with are the same ones which were said to stop you on a three-penny piece (or even a fifty quid note, which is much bigger).

Standard brake mod’s (how’s that for a contradiction?) include racing linings and the addition of stiffening gussets in strategic places. This makes them halfway decent stoppers until the linings wear and then the cam can go over-centre, which jams the shoes on to the drums. Extremely amusing – but only sitting here writing about it. No, besides a finally honed sense of panic, what you need to pull up fast on this bike is a set of fancy asbestosis-producing linings, which last for around 8000 miles. For some reason, the left-hand ones wear out faster than the right – very strange as these are double sided SLS brakes worked by a balance beam which should give equal braking on all shoes.

But not half as strange as the psychology of active Vincent ownership. I think I can safely say that this motorcycle is definitely not suited to people who’re prone to paranoia (that’ll exclude 99% of us). However if you’re a short-arsed Parisian with the hump, given to muttering about the bells, you’ll love the horrendous cacophony made by the engine – and that’s just turning it over. When it’s actually running, imagine Godzilla dropping Rolls Royces down Everest for the valvegear, a 99 piece steel band for piston slap and a trio of accelerating Jumbo jets for induction suction – and you’ll have some idea why all Vincent owners look so worried!

After the wife became pregnant, I fitted a set of Girdraulic forks and a sidecar – what fun! I’ve had more near misses on this contraption than I’ve had dole giros since the lovable M.Thatcher closed our local pit. I once took me old dad out – at the first red light he leapt out and ran into the nearest church! The only good thing was all the junk it’d carry, though on one trip I had to keep replacing the spokes – as I said, loadsa fun!

More joy was found in the poxy chain oiler. It either lets the chain run dry or smothers the rear tyre with warm engine oil. Smashing if you like crashing! Instead, I oil the chain every 200 miles, which gives around 10,000 miles chain life. Not bad considering the crude transmission shock absorber – yet another troublesome area. I’ve locked mine up solid, so all the silly little springs won’t break again, leaving me stranded miles from home.

As to vibration, it goes like this: Up to 60mph, acceptable shaker; 60-75mph, occasional double vision and one numb finger; 75-90 difficulty keeping feet on footrests and three numb fingers in both hands; 90 plus, short bursts only possible – expect premature baldness, dead fingers, dead toes and dead genitals. Fine if you’re an eunuch or live in a monastery; which I’m not and don’t…

When the lad got big enough to bite kneecaps instead of ankles, we unhitched the sidecar and tipped it into the Calder and Hebble Navigation canal and did yet another engine rebuild. Needed more work than normal but I’d done 15000 miles with no major problems and was actually enjoying riding the brute…when gradual loss of compression and power forced me to lift the heads. Burnt valve seats, an all too common problem on Vinnies. There’s lot of other stuff, like short-lived magneto’s, but what the hell…

I bought mine for £180, have kept it for 21 years! Anyone who expects a great riding machine will be in for a shock. They’re not bad bikes but not particularly good either. And don’t think I’m about to sell after this diatribe, cos I’m not. Not as long as I can fire it up anyway.